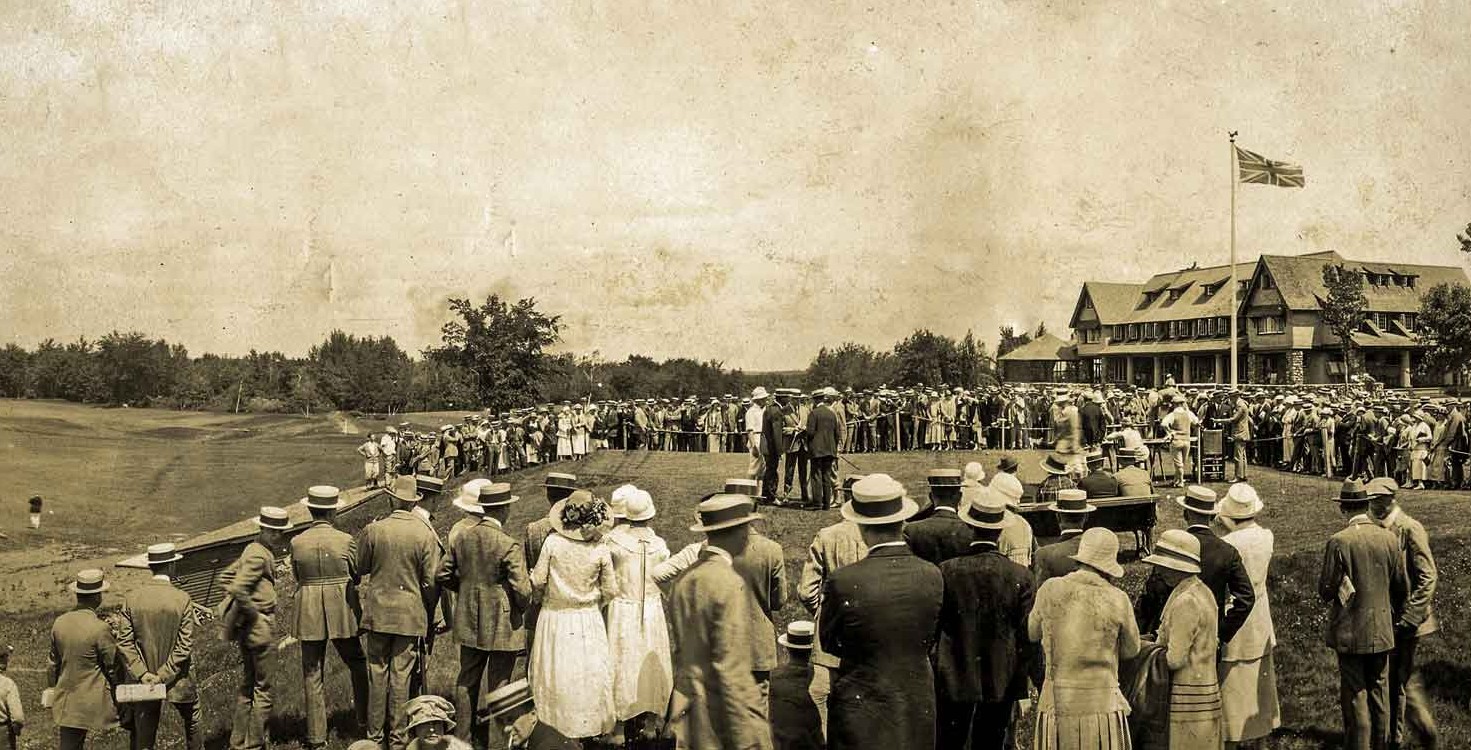 The Kanawaki fixture card is well interspersed with competitions each year which are available to both the serious and social golfers. The Club is well endowed with trophies that attest to and perpetuate the memory of those who have shown so much interest in the Clubs welfare over the years. Several of the trophies were inherited from the Outremont Golf Club and are still competed for annually.

It would perhaps be of interest to many to know something of the origin of the main trophies which are displayed in the Trophy Room:

Club Championship Trophy  This very handsome trophy was presented by Mrs. J. Harry Birks in 1949 in memory of her late husband who had been so prominent in the early development of the club. It is awarded annually on a medal play basis.

In 1954 the two plaques on which the names of the winners are inscribed were donated by Donald Stewart.

Try-Davies Cup  Captain Try Davies was the president of the Outremont Golf Club in 1902 and 1903, and as one of its founders was largely responsible for selecting the site. The trophy is played for in scratch match play and a qualifying round is held early in the season to determine the 16 players to be entered in the draw. It was first played in 1903.

Daniels Cup  This trophy was presented in 1934 by Mrs. F.G. Daniels in memory of her husband who had been president of the club in 1925 and 1926  an important period of expansion and emergence of the club. The cup is put up for competition in scratch match play and is open to members fifty-five years of age and over.

Carson Trophy  Mr. John Carson, a member, felt there was a need for stimulating the interest of the older members who had no chance in competitions for the Daniels Cup, and accordingly in 1953 presented a trophy for play on a handicap match play basis open to members fifty-five years of age and over.

Drummond Cup  This is the most popular of the Club competitions and the one within range of all members. Consequently well over half of the membership enters the competition which starts on opening day and continues through to the end of the season. Matches are played on a handicap basis. The cup was presented by Sir George Drummond KCMG to the Outremont Golf Club in 1903, and the names of golfers at all levels of skill are to be found among the winners.

C.C. "Happy" Fraser Memorial Trophy  This trophy features the putter and ball used by "Happy" Fraser when he won the Canadian Amateur Championship in 1922. It, too, is competed for by a large number of the members in four-ball better ball matches that are very popular.

Rudel Trophy  Mr. Clarence M. Rudel an ardent member who did much for the club during his lifetime, and in his memory his son, Thomas Rudel, presented a trophy for Father and Son competition in a two-ball eighteen hole stroke play.

Tin Hat Trophy  An annual competition and parade of members who have served in any capacity in the armed forces is held at the close of each season. This attractive trophy was first played for in 1935, and is awarded at a special dinner which climaxes the day long outing.

The trophy consists of the service helmet worn by Hugh Millar while serving overseas in the First World War. When first put up for competition it was the winners privilege to wear the tin hat during the dinner and ensuing festivities. In 1938, in order to give some permanence to the trophy it was mounted on a plaque by W.A. Clark.

Bill Taylor Executive Cup - Match Play Competition - Open to members sixty years of age and over. To be competed for over the Gold Course. Full handicap differential. Final: 18 holes.

Ogilvy Cup  This Cup was donated by Mrs. Enid Ogilvy in 1982, on behalf of the long standing association with Kanawaki of the Ogilvy family. This Cup is competed for annually by a Parent-Child teams, (other than Father & Son).

Walker Trophy  Mr. & Mrs. Harry Walker donated the Walker Trophy in 1983 for the Mixed Club Championship which is played every year in September.

Gordon B. Taylor Trophy - Presented to the Club in 1999 by the Taylor family; originally an invitational tournament, and later changed to a Kanawaki four ball better ball match play event in three divisions. Teams are selected by a draw.

George M. Dundass Trophy  Donated in 2007 by friends and associates of George M. Dundass, a longstanding member of Kanawaki. This trophy is presented annually to the Senior Mens Club Champion.

Captains Prize - Open to members fifty years of age and over. Played on gold tees. 80% of handicap competition.

Weekday Competitions - Every Tuesday  must sign up  draw done on Monday morning.

Ogilvy Cup - Any parent and child team is eligible, except father and son.

Intersectional Teams : A, Senior and B - Seven (7) of the best lady players are chosen to represent the Club at an Inter-Club competition in the Montreal district. Must have participated in at least Kanawaki Ladies competitions.

Ladies Invitational Competition - Hosted on a rotational basis by the four founding Clubs: Beaconsfield, Kanawaki, Laval-sur-le-Lac and Royal Montreal. Teams of two, best ball in the qualifying round, followed by match play.